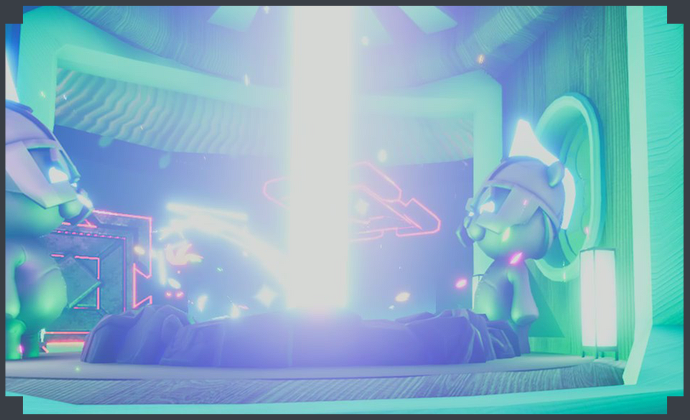 Light Bearers is a multiplayer asymmetrical hide and seek game where during each round one player is chosen as the Shadow while the other players play as Light Bears trying to avoid being infected by the Shadow. Once infected Light Bears become Shadow Bears, they start working for the Shadow and trying to capture/infect the remaining Light Bears.

All Bears (Light or Shadow) play in first person to create a more gripping and adrenaline pumping experience while most Shadows play in third person to give them better situational awareness and a sense of true power.

To Host your own server all you need to do is click "Host Game" from the main menu of the game.

The server creation window will pop up and ask you to fill in some basic information such as Server Name, Max Player Count, Favored Mode and Match Time. You can also select which map you want to start playing on. If you are wanting to create a private server for just you and your friends, you can also add a password.

Click start and you are ready to start playing

To join a game already in progress, simply click "Join Game" from the main menu of the game

A lobby list will appear, showing the available servers and you can select which one you want to join. If you aren't seeing the one you are looking for, chances are it is a full server and won't appear in the list until a spot opens up.

When you first load into a server, if the round is already in progress, you will have to spectate until the next round starts.

A Match is characterized by the selection of a new map and can be comprised of several rounds. The match time is determined by the host during server creation. If the time is not changed, it defaults to the standard 10-minute matches.

During each round you gain points for doing various things. Once the match timer reaches zero, the person with the most points wins the match and their victory decoration is displayed for everyone else to watch while they select the next map.

At the start of each round, one player is randomly selected to play as the Shadow. You have 20 seconds to select a Shadow from the drop-down list and click "Start Game". If you fail to pick, the Light Bears win the round and a new player is selected to pick a Shadow.

A new feature, recently added, is the ability to opt out of Shadow Selection. You can select this feature in the settings menu.

There are two game modes in Light Bearers: Light Favored and Shadow Favored. The default game mode for any hosted server is Light Favored, however it can be changed to Shadow Favored in the server creation window that pops up when you host a server.

The two modes were added to the game after initial release to give new players an easier time learning the game mechanics before jumping into hard-core games with more experienced players.

In this game mode, Light Bears are given the advantage making it easier for the Light to Prevail. The major differences are listed below:

In this game mode, Shadows are given the advantage making it more difficult for the Light to Prevail. The major differences are listed below:

In the Shadow Favored Mode, circular platforms will appear randomly throughout the map.

If a Light Bear stands on the pad it will begin charging and you can see a blue beam slowly building up around the outside of the platform. The more Light Bears, the faster the pad will charge. Once fully charged, all Light Bears on the pad are granted a Blessing from The Light Maiden.

If you are awarded a Blessing, it becomes a secondary ability for your bear and is accessed using the Right Mouse Button (RMB). See the table below for all Blessings currently available in the game.

On the flip side if a Shadow Bear is on the Blessing Pad a red beam will slowly build up .If the pad is fully charged by Shadow Bears it will destroy the pad and prevent Light Bears from getting any Blessings from it. It will also give any Shadow Bears on the pad a speed boost for a short duration.

Lastly, if a Shadow Bear tried to get on a Blessing Pad currently occupied by one or more Light Bears (or vice versa) the Blessing Pad rejects everyone sending them flying in opposite directions. If no one is standing on the Blessing Pad, the charge (either blue or red) begins to deplete.

If you jump and touch a vertical surface instead of the ground, you can increase the height of your jump. There are diminishing returns, so you can only wall jump so many times before the acceleration plummets you to the ground.

Holding the Control Key (CTRL) will cause your bear and or Shadow to crouch. You can also press the 'C' key to toggle crouch instead of having to hold CTRL. The crouch action is broken if you press Space Bar to jump.

There are a few ways this is a useful movement mechanic:

The Pool of Light[edit | edit source]

The Pool of Light spawns during the last 30 seconds of a round and is the only way for Light Bears to escape from the Shadow. Some maps only have one spawn location for the Pool of Light, while others have multiple locations it can spawn in. If you are still a Light Bear when the Pool of Light opens it will show through the walls with a blue outline. There are also icons placed throughout each map that can help you find a path to the Pool of Light, but beware that Shadows might be camping those well known paths.

Each Light Bear that jumps into the Pool of Light adds 10 seconds to the remaining round time.

During each round you can score points in various ways ranging from staying hidden for long periods of time to saving a fellow bear being infected. There are also ways that you can lose points such as falling off the map or being infected.

Always remember, the braver you are the more likely you are to score high value points.

Whichever player has the most points at the end of a match is declared the winner. During map voting for the next match, the winning player is put on display for everyone else to watch their selected victory decoration and music.