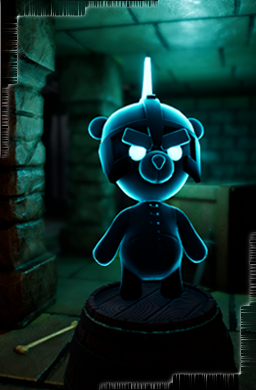 Light Bears are the runners in Light Bearers, who must survive the entire round and escape into the Pool of Light to defeat the Shadow. Every bear is given at least the primary ability to Dash and in Shadow Favored servers they can also get awarded a Blessings as a secondary ability. During a single round, their goal is to avoid the Shadow at all costs, but if they are infected they will become a Shadow Bear and they must begin hunting the remaining Light Bears. There is a small window of opportunity when a Light Bear is being infected that they can be saved by other Light Bears.

It was just a regular Tuesday for the Light Bears when the Shadows infected their world. Before that, darkness and anger were fictitious notions never felt in The Twilight. This wasn't all that surprising considering the Light Bears are the embodiment of every happy thought and dream the universe has ever had, but I suppose we should start at the beginning.

And on the 17th day, The Twilight was created. It was meant to house all the good energy of the universe, but as with all things nothing ever goes exactly to plan. What was originally intended to resemble the Elysium Fields has now become the playground for bouncy and giggly Light Bears. At the time of the incident, The Light Maiden had been reprimanded for her part in bringing the Light Bears to fruition, but since the infection of the Shadows began she has done more to preserve the goodness and light of the universe than anyone and will be forever revered.

Light Bears are inherently good and virtuous. So when the Shadows arrived, they believed it was simply more friends to play with. It wasn't until the first Light Bear became a Shadow Bear they realized just how infectious the Shadows really were. Anyone fully infected by the Shadows would start acting strange and chasing Light Bears around claiming they had cookies. It was obviously a lie, but not wanting to be rude and exclude anyone from their games, especially someone sick, they continued to play with the contagious creatures making sure to cleanse any Light Bear who got a little too close.

What the bears failed to realize was that for every Light Bear who became infected, a person's hope was dashed or dream destroyed. Without the good energy of the universe to help those in need, all that was left was darkness and despair. Exactly what Vir De Somnio wanted. The agents of light called upon The Light Maiden who had been entombed by shadow tendrils for help. She was the only one close enough to be able to save as many Light Bears as possible and thusly the universe.

The battle rages on to this day, new Shadows continue to come through the breach and The Light Maiden is running out of options. Somehow they must find a way to close the cracks and save the universe from a fate worse than destruction.