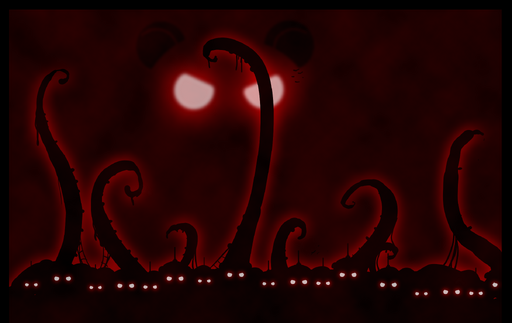 Viroz lay on his back in the darkness. He had been sentenced to this unfair existence eons ago. Forced to lay motionless in a confining stone sarcophagus. At first, the absolute dark frightened him but has since gotten used to it. It still confused him how they could think this punishment fit the crime. Was it his fault the universe has a dark and vengeful side that only manifests every 5 billion years? Was it his fault it just so happened he stepped from the stardust at that exact moment? From that moment he was labeled and processed as Viroz The 3rd, indicating the 2 others before him, had suffered the same fate. He had not even uttered his first word before they sized him for his suffocating coffin.

That was the only solution the powers that be had to protect the universe from itself. They simply locked the "evil" spawn away forever in an unknown plane of The Chaos hoping eventually it would just waste away. They weren't completely wrong, Viroz's two predecessors did waste away in their dark confines but the process took billions of years. 5 billion to be exact. What they failed to realize was that each time they faded away, their energy returned to the universe which would, in turn, reproduce the same creature. It was a vicious and cruel cycle because these so-called agents of light were subjecting a living creature to complete isolation and darkness. Eternity knowing nothing but their own seething hatred.

Viroz was no different. He lay there remembering the faces of every individual who had interred him in this hell. Constantly he asked himself, what makes them so special? They are a dime a dozen. Not him, he was special. There was only ever one of him in the whole wide universe. Deep down he could feel it. He was meant for more than this. The universe created him for more than this. These thoughts fueled him and astonishingly he kept his sanity throughout, whereas those before him went crazy a few millennia into exile.

No matter how focused he remained on his vengeance, he could feel himself fading. His thoughts were harder to keep straight and he found himself speaking out loud more often. The air within the coffin was thick and breathing was becoming difficult. He could not confirm, but he was fairly certain his limbs were withered and decayed. The thought of wasting away angered him so much. He had spent billions of years telling himself he was special, he was different only to be met with the same fate as the others.

In that moment, all the anger and hate Viroz had been focusing on for 5 billion years culminated into a single point and exploded across The Chaos. His stone coffin cracked and he could feel the universe pouring in fueling him. He screamed again "I will not wither, I will not fade!". The crack widened big enough for his small frame to escape through. He landed in the upper towers of the everlasting labyrinth in the 4th Plane. Standing at the precipice of the tower window he looked out and proclaimed to the universe. "I am Vir De Somnio. I am your worst nightmare"

High atop his tower, Vir De Somnio scours The Chaos Plane picking and choosing desperate Shadows to free and release. Shadows who embody the anger and vengeance he seeks. He hears their pleas and gives them exactly what they want. A few have slipped through the cracks he has created, but they serve him unwittingly. Creating the necessary Chaos to bring about the shift in the energy of the universe.

From the Gate he can also see into The Twilight, keeping a watchful eye on the Shadows progress. He would be so much further along if it wasn't for The Light Maiden meddling from her Shadow Tomb. Apparently his attempts to squander any power she had by burying her had little to no effect. Every day more and more Light Bears escape The Twilight. He knows he has to find a way to get rid of her. He begins flipping through the various places in The Twilight searching for a Shadow strong enough to take on The Light Maiden "Wait... was that.. no.. Cthul..... " Pressing his hand against the bridge of his nose he lets out a sigh of frustration.